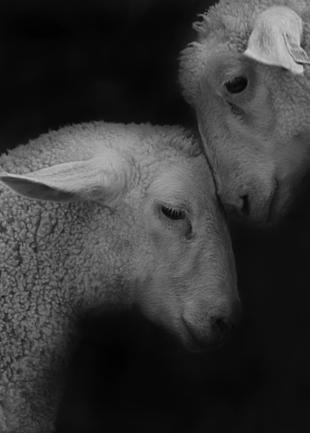 Steven Read and Jodi Ohlsen Read established Shepherd’s Way Farms in rural Carver County Minnesota with a small flock of dairy sheep in 1994. Initially, the farm produced only milk, which was sold through the Wisconsin Dairy Sheep Cooperative. Shepherd’s Way was one of the founding members of the WDSC, helping pave the way for other dairy shepherds.

The farm relocated to its current location in 2001, just outside Northfield, Minnesota across from the Big Woods State Park. Shepherd’s Way Farms flock had grown to be one of the largest sheep dairy flocks in North America. Milking and cheesemaking were now housed in adjacent facilities within the long barns.

In October 2004, Jodi and Steven were among the 5000 food producers chosen by local Slow Food conviviums to represent the United States at the first Terra Madre Conference, sponsored by Slow Foods International in Torino, Italy.

A devastating arson fire in January 2005 destroyed more than 500 sheep and lambs and all of the animal housing. At the end of 2005, milking was suspended and cheese production continued on an extremely limited basis. With enormous community support, Shepherd’s Way has persevered, slowly rebuilding and resuming full production in 2011.

Shepherd’s Way Farms was able to continue growing small foundation flock of 200 dairy ewes after the Kickstarter-community supported renovation of the ‘new’ lambing barn (see Barn on the Move for more about this crazy barn-saving project!). Currently, 450 ewes make up the dairy flock, with 2019 lambs on the way.

The farm is often home to heritage breed chickens and an assortment of pasture-based pigs that are fed the whey from cheesemaking.

And, the Read’s four sons grew up on the farm, taking part in all aspects of the farm. Today they still have crucial and varied roles in the farm in addition to their own academic and professional careers -- running farmer’s market booths, maintaining animal health and participating in many facets of cheesemaking and sales.